Back in 2017, I entered a frontend interview and I was asked to write some code on a whiteboard. I was given the Fizzbuzz problem. Without thinking I immediately went for JavaScript. Recently I learned about CSS counters and that got me thinking. What if we can do it with CSS?

In this article, I am going to show you two easy ways to solve the Fizzbuzz problem with CSS.

What is the Fizzbuzz question?

We can loop in Pug

Loop for 1 to 100 and create an HTML element. In this example, we are creating a div. We will use each div to hold the counter.

We are using a for loop here. We could also write an each iteration such as each _ in Array(100) instead.

To get started, we must first create a counter-reset. This will initialize our CSS counter, giving it a name and setting its value. By default, the value is 0.

Once a counter has been created, we can use counter-increment to increment its value. For every fizz div, let's update the counter.

This gives us the following: 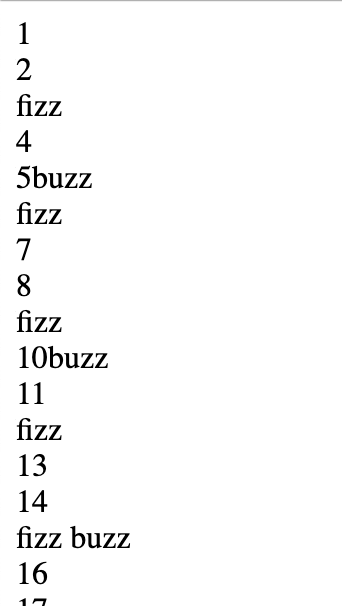 Here is a working example in codepen.

See the Pen Fizzbuzz 1 by Gary Byrne (@garyb1) on CodePen.

In some cases, an interviewer might ask to change your code to work for a different range instead of 1 to 100. We can write a Pug mixin to take a min and max value.

Here is a working codepen example:

See the Pen Fizzbuzz 2 by Gary Byrne (@garyb1) on CodePen.

At the time of writing, CSS Counters are supported in most major browsers. See Can I Use for more information.

Let's copy the same pug from the last example.

So we have an ordered list here which returns a list of numbered elements. So if we render 100 list items in that ordered list, we have the numbers already available to view. Although it makes no sense semantically, it is just to show how we might do this.

In this ordered list, we can set the list-style-position of each list item to inside. This will set the position of everything inside, relative to the list which created the nice alignment. We then just set the list style to none to remove the numbering on those items that need the text.

Here is a working example: